Summary: Tenzin Nyima, 19 years old, staged a peaceful protest calling for independence in Tibet.
Charge: Inciting separatism
Sentence: /
Status: Tenzin Nyima was re-arrested on 11 August 202 for allegedly sharing news of his protest to Tibetans in exile. He was severely beaten by Chinese authorities and pronounced dead on 1 December 2020.

Tenzin Nyima, a young Tibetan monk, was arrested alongside six other Tibetan monks – aged between 16 and 23 – after they staged a peaceful protest outside a police station. They called for independence for Tibet.

He was released in May 2020 but re-arrested on 11 August 2020 for allegedly sharing the news of his arrest and contacting Tibetans in exile in India. 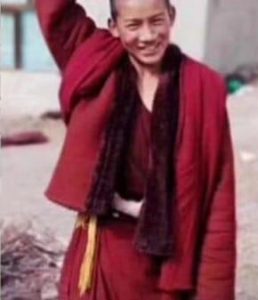 The next news of Tenzin Nyima came on 9 October 2020, when his family was contacted by the police, who informed them that his health had deteriorated and he was now in a comatose state. A hospital report that Human Rights Watch obtained indicates that he had been in critical condition for ten days before being handed over to his family. His family took him to a nearby hospital in Chengdu, where his admission was delayed due to the family’s inability to afford the expensive medical charges. His family was only able to successfully admit him to hospital almost two months later, still comatosed, on 1 December. He died shortly after.

The trials of Tenzin Nyima and six other Tibetans took place at the Intermediate People’s Court in Sershul on 10 and 12 November 2020. On 14 December, four other monks from Wonpo monastery and two local youths, all between ages 16 and 23, were sentenced for involvement in one of two protests in Wonpo in November 2019 or for spreading news about the first incident. The sentences ranged from one to five years. The sentencing of Tsultrim, who was 15 or under at the time of the protest, is contrary to Chinese and international law.

Download our document and
WRITE IMMEDIATELY TO YOUR ELECTED REPRESENTATIVE

Download our document and
SEND APPEALS TO THREE CHINESE LEADERS