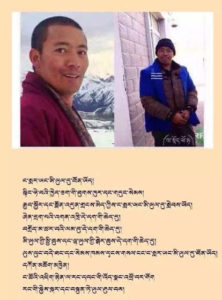 Khenpo Kartse, the popular and respected religious teacher whose detention in 2013 sparked peaceful protests and a silent prayer vigil, has been released after serving two and a half years in prison.

Khenpo Kartse, whose case became prominent internationally with calls for his release by governments and thousands of Tibet supporters worldwide who petitioned on his behalf, issued a low-key social media posting in Tibetan on following his release in the form of a short poem. In the poem, he said he was moved by the concern that had been demonstrated towards him.

The detention of Khenpo Kartse caused widespread distress, with hundreds of Tibetans gathering peacefully to protest his arrest, and a rare silent vigil on his behalf being held outside the prison in 2014.[1] An image of Khenpo Kartse (Khenpo means abbot and Kartse is the shortened form of his name, Karma Tsewang) handcuffed and in prison uniform circulated on Chinese social media following his initial detention.

Khenpo Kartse, an abbot from Gongya monastery in Nangchen, Yulshul (Yushu) Tibetan Autonomous Prefecture in Qinghai, is well-known for his environmental activism and support for the preservation of the Tibetan language and culture. He was active in social work following the devastating Yushu earthquake in 2010. He was detained on December 6, 2013[2] in the provincial capital of Sichuan, Chengdu, and taken to Chamdo (Qamdo or Changdu), where he was apparently sentenced behind closed doors. There was concern for his health in custody as medical problems that were known before his detention went untreated, he was kept in a cold cell and had inadequate food.

Full details are not available about the circumstances or exact date of his release, nor of the exact charges against him, but reports circulating on social media indicated that early reports of a two and a half year sentence were correct. Details about his current health condition are not known, and he is likely to be under very close supervision by the Chinese authorities.

Typically, former prisoners face profound fear and anxiety upon their release, combined with a constant awareness of being under surveillance. Their psychological suffering is often heightened by the knowledge that their family and friends are also under pressure from the authorities. They often suffer from severe financial hardship as they are dependent on their families, often unable to find work due to their status as a former political prisoner. Monks and nuns are not permitted to return to their monasteries or nunneries. Sometimes they cannot afford medical treatment needed following severe torture or years of poor nutrition in prison.

Because they are perceived by the authorities as a threat to the Party-state as a result of the views and actions that led to their sentencing, former prisoners are strictly controlled and isolated, partly in order to create a visible deterrent to other Tibetans who may seek to express views that are counter to those of the Beijing leadership, or those like Khenpo Kartse, who are active in the community and wider society.

Khenpo Kartse’s Chinese lawyer Tang Tianhao traveled several times to Chamdo and was only allowed to meet with him twice, for a short time, according to Radio Free Asia and other sources. Tang Tianhao was later compelled to withdraw from the case due to pressure from the authorities. Following his initial detention, the lawyer was told by Chamdo police that the case involved endangering state security, according to Beijing-based Tibetan writer Tsering Woeser.

Khenpo Kartse’s imprisonment attracted significant international attention, as well as expressions of solidarity and brave vigils by Tibetans in Tibet. Thousands of ICT supporters across the world added their names to petitions for his release and his case was raised by several governments in dialogues on human rights with China.

A Facebook posting on July 15 written by Shiwapa Kunkyab Pasang welcomed Kartse’s release and expressed gratitude “to all who support justice by standing behind oppressed Tibetans in Tibet, including all political prisoners.”[3]

The following poem by Khenpo Kartse appeared in an undated post since his release, translated from Tibetan into English by ICT below.

For the duties that come with strong attachments,
For the paths we have yet to take,
For the common welfare of the human world, and individual aims for the divine,
Healthy in body and sound in mind, I am back once more in the human world

All-knowing Three Jewels,
May the light of freedom shine in our world!

Eight Tibetans Are Detained For Resisting Eviction in Kyegudo